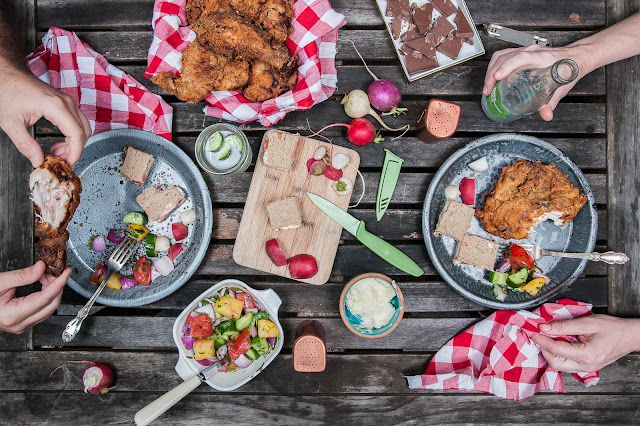 But here's why you should know Richard Blais: he received an AOS in culinary arts from The Culinary Institute of America and has studied under chefs Thomas Keller, Daniel Boulud, and Ferran AdriÃ . Blais also studied at Chez Panisse. He currently runs four restaurants, three in Atlanta: The Spence, Flip Burger Boutique (also one in Birmingham), and HD-1 (also known as Haute Doggery). In 2011 he released his cookbook, Try This atHome: Recipes from My Head to Your Plate. And, finally, he is slated to open another spot in San Diego in December.
It looks like he's also running marathons as well - Blais Runner (I had to do it). With a wife and two daughters, Blais is a busy man, to say the least.
So you can imagine my good fortune to be able to catch him for an interview recently to talk about the South, pimiento cheese, vinegar and his perfect picnic. 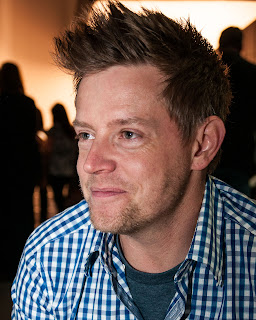 FFF: Â  Iâ€™m curious about how you got to Atlanta.
RB: Â  Iâ€™m a native New Yorker and I was dating a girl whose dad was a restaurateur in Atlanta. I was working in Manhattan at the time at Restaurant Danielle and the restaurateur asked me to come down there and take over the restaurant and I did.
FFF:Â  When was that?
RB:Â  That was a long time ago, 1999-2000. 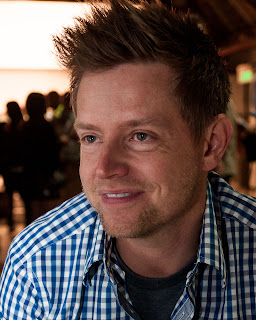 And, so, as we have deemed June Picnic Month here at F for Food, we decided to make Richard Blais' 'ideal picnic':
Pimiento Jack Cheese Tea Sandwiches
CruditÃ©: Radishes with Salted Butter andÂ Heirloom Tomato, Cucumber, Red Onion Salad
Cucumber Soda
Double-Dipped Buttermilk-Chile Vinegar Marinated Fried Chicken
Chocolate Chunks
Everything was sensational. I even like his version of pimiento cheese (I can feel my mom's eyes rolling out of her head right now). I think Blais would be pleased - we used vinegar in almost everything. I even made my own chile infused vinegar for the salad dressing and the chicken marinade. But the recipe I want to share is that of the fried chicken. That was the star. The chile vinegar added a really nice back end heat with every bite, and the double dredging ensures a super, extra awesome crackly, crispety,Â crunchetyÂ skin. And that's the whole point, right?
Happy picnicking! 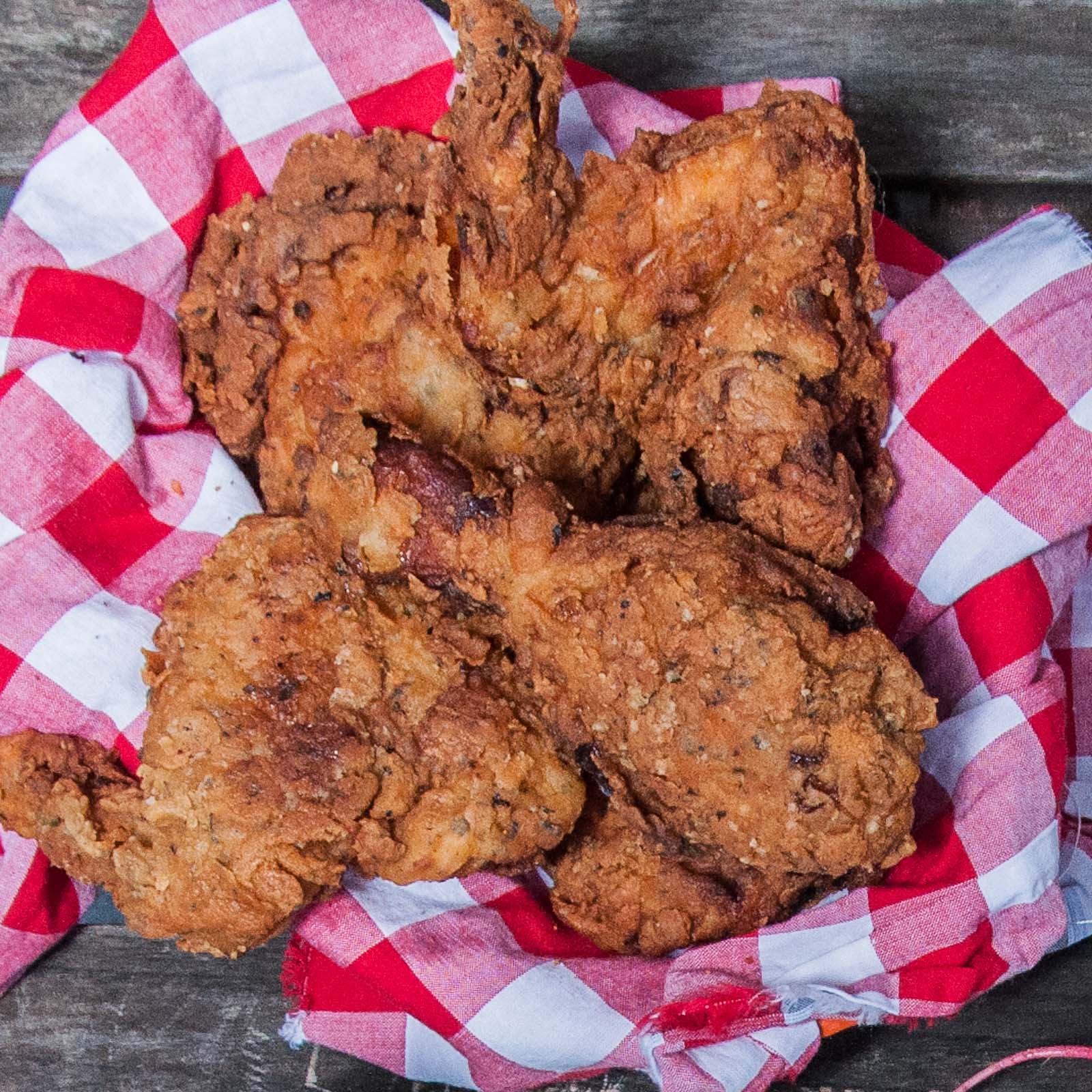 Double-Dipped Buttermilk & Chile Vinegar Fried Chicken
Serves 4
2 cups buttermilk
3 tablespoons chile vinegar
1 tablespoon dijon mustard
2 teaspoons tarragon, divided
Â½ teaspoon paprika
1 teaspoon plus Â½ teaspoon cayenne pepper
1tablepoon plus 1 teaspoon salt
1 tablespoon plus 1teaspoon ground pepper
1 chicken cut up into 8 pieces
3 cups all-purpose flour
Vegetable shortening & vegetable oil, for frying
Combine the buttermilk, chile vinegar, dijon mustard, 1 teaspoon tarragon, paprika, Â½ teaspoon cayenne pepper, 1 tablespoon of the salt, and 1 of the pepper in a nonreactive bowl large enough to contain all of the chicken pieces with at least 1 inch to spare. Add the chicken and turn to coat fully in the marinade. Cover with plastic wrap and marinate in the refrigerator for at least 6 hours or overnight. Remove the chicken from the refrigerator about 45 minutes before frying.
Line a large baking sheet with aluminum foil. In a large, shallow bowl, combine the flour, remaining salt, pepper, tarragon & cayenne pepper. Remove the chicken from the buttermilk marinade and roll it around in the seasoned flour until completely covered. Set it on the prepared baking sheet; repeat with the remaining chicken. Dip the coated chicken pieces once more in the marinade, then again in flour. Return the pieces to the baking sheet (a few minutesâ€™ rest makes for a sturdier, crisper coating).
Have a wire cooling rack set over paper towels ready. In a large, heavy cast-iron skillet, heat 1 1/2 inches of shortening & oil over medium heat until it reaches 350Â°F on a deep-fat thermometer. Using kitchen tongs, add a few chicken pieces at a time to the hot oil (crowding will lower the temperature, making for greasy chicken). Fry the chicken until the internal temperature reaches 180Â°F, about 10 minutes per side (watch carefully, it can easily burn). Transfer the cooked chicken to the wire rack. Serve immediately or at room temperature (donâ€™t let the chicken sit more than 2 hours).
Do it Earlyâ€¨The chicken can be fried up to 2 days in advance, covered, and refrigerated. Serve it coldâ€”a classic picnic foodâ€”or reheat on wire racks set on baking sheets in a 375Â°F oven for 15 to 20 minutes.
Tip â€¨If the chicken looks pretty dark before it is cooked through, transfer to wire racks set on baking sheets and bake in a 375Â°F oven until the meat reaches an internal temperature of 180Â°F on an instant-read thermometer. Keep fried chicken warm in a 200Â°F oven. Using a digital thermometer eliminates the need to stand over the chicken. When the alarm sounds, the meat is done.
Printable recipe.
One year ago: Fresh Mint & Chip Ice Cream
Two years ago: An Evening in Gruissan.
Three years ago: Shiso Leaf Butter