Oct 04, 2016 in chowder, clams, dinner, easy to make. Read the original on: The Culinary Chase 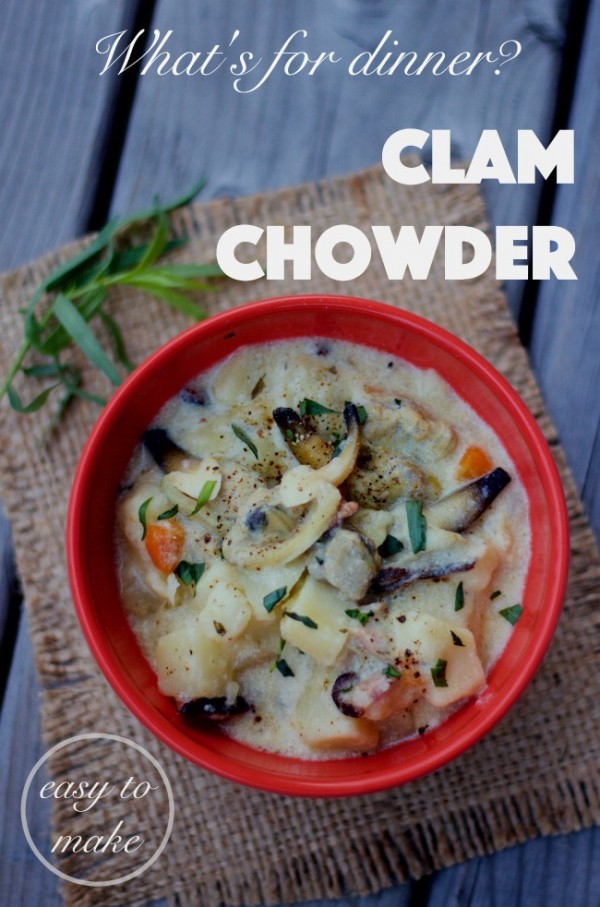 For generations, my family has made clam chowder and I continue the tradition. I recall my pleasure of crumbling saltine crackers atop the bowl of momâ€™s homemade clam chowder; not to thicken it up but, simply put, it was a tradition in my parents home. The maritime autumn weather can be lovely and sunny but temperatures later in the day tend to drop off dramatically leaving me in search of a warming supper. A chowder is simple and delicious. Itâ€™s hearty enough to satisfy oneâ€™s appetite and easy on the pocketbook, too.

Traditionally I have used canned clams but for this recipe I chose fresh. You can use any clam your fishmonger or grocery store offers. I used steamer clams which are also known as long-neck clams or soft-shell clams. Hard-shell clams are known as quahogs (pronounced co-hog) and referred as â€œlittle necksâ€ (the smallest, 7 to 10 clams per pound), â€œcherrystonesâ€ (medium, 6 to 10 clams per pound) â€“ both are good in a chowder. The large quahog (2 to 3 clams per pound) can be a bit toothsome (chewy). Personally, I find the little guys have the best flavour and taste sweeter. Some cooks like to add flour to thicken the chowder but I mash some of the potatoes if I want a thicker consistency.

The Culinary Chaseâ€™s Note: Make sure the potatoes are well covered with milk (at least an inch above). If you want to use canned or bottle clams instead of fresh, add clams to chowder a few minutes before veggies are cooked. Pour in some of the clam juice from the can for added flavour. Enjoy!

The post clam chowder appeared first on The Culinary Chase.

Read the original on: The Culinary Chase