Comfort Me With Bucatini. 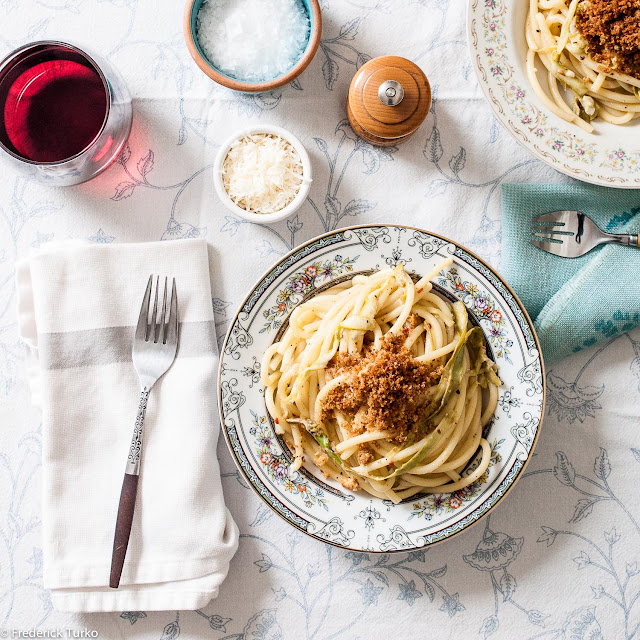 Growing up in Richmond, I recall very little pasta happening in either of my parents' kitchens, except maybe pasta salad. I also don't remember going out for much Italian food back then. I'm sure there was spaghetti and meatballs when I had dinner at my friends' houses, but â€“ and I could be wrong â€“ I don't think I ever saw it on my dining room table(s). That's weird, right? I mean, I don't even think we did lasagna, for crying out loud. It's a miracle I turned out alright.


That being said, there wasn't a ton of Italian food in my life for quite some time. After college, in the early Atlanta years, there were a couple of EYEtalian restaurants where I dined on occasion. By EYEtalian, I mean dimly lit rooms with red checker tablecloths, taper candles in old chianti bottles, dishes like eggplant parmigiana, veal scaloppini, chicken marsala, penne alla vodka (one of my favorite pasta dishes to this day), mostaccioli, linguine with clam sauce, baked ziti, lasagna, and spumoni or cannoli for dessert. Oh, and both kinds of wine: red and white.


Then in the last year or two there, a couple of Italian restaurants popped up that became game changers. For me, at least. Actually, it was really one restaurant that later became two with the same owner. The first born, Sotto Sotto, was the higher end version of its younger sibling, Fritti. It was at Sotto Sotto where a lot of things about Italian fare really evolved in my world. In a little restaurant in Inman Park, Atlanta, my palate got to travel from Southern to Northern Italy for the first time. I remember tasting delicate, handmade pastas of all shapes, sizes and consistencies, flecked with bright and fresh surprising accents like arugula, mint, and lemon or anchored down with braised, local duck with an aged twelve year balsamic. There were fresh truffles, walnut sauce and sage browned butter, which fifteen years ago was not something I saw on menus very often. I remember having the most delicate beef carpaccio I had ever tasted. The beef sliced so carefully, so thinly, that it essentially melted on my tongue. And then when the little sister, Fritti, came along, I was introduced to the lightest, freshest calamari fritti, garnished only with fresh lemon, and their crimini and portobello mushrooms, lightly fried in rice flour batter with white truffle oil. Most importantly, it was the first time I became acquainted with Neapolitan pizza. And burrata.


Best of all, I lived a mere two blocks away. Even bester, two of my girlfriends and my then boyfriend worked there.


And so an Italian food lover was born.


In the eleven years that I have lived here in LA, though, I don't make pasta at home as much as other things, I would say that my go to meal out is easily for Italian food. More often than not, what I crave is the Northern Italian fare; the fine handmade pastas with fresh, seasonal produce, nuanced flavors and elegant sauces, and almost always I will opt for Neapolitan pies to that of any other. That said, I would never turn down a dinner at Dan Tana's. Who wouldn't want a side of spaghetti with their spaghetti? 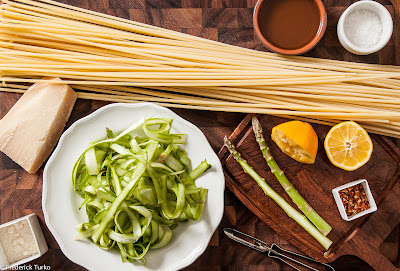 But here's the thing, a couple of years ago I came across a recipe in The Week for a dish called Cacio e Pepe. Its scant few ingredients and seemingly whimsical and simple process tempted me. The recipe called for a long pasta (in this case, bucatini), Parmesan cheese, extra virgin olive oil, Kosher salt and lots and lots of freshly cracked black pepper. After I tried to make it the first time, and failed, I started to read about the recipe. I realized that this dish exemplifies the complexity of pan sauce precision. Of course! This is one of those less-is-more, minimalist recipes by which cooks are measured â€“ and as I read on, I learned that no two chefs agree on how to do it just right.


And, it's a Roman dish... making it kind of EYEtalian!


After that, my interest was piqued. If I saw it on a menu, I ordered it. And, for the most part, folks were using the bucatini. So, my only occasion, other than my own kitchen defeat, for both the bucatini and the cacio e pepe had been when dining out.


Then I met Fred. And on our third date, he invited me to his place to cook me dinner. I remember thinking, â€œUh, oh. He has no idea what he's gotten himself into. Be nice, be nice, be nice.â€ Beyond all of the bells, whistles (the right kind, not the gaudy kind), and the t s crossed and i s dotted, there he was, in his kitchen, with a YouTube video playing on his iPad illustrating how to make cacio e pepe. And before you ask, no, he had no idea. This was all Fred.


I remember thinking it was going to be a disaster. If I couldn't make it right, and it was such a cornerstone for great chefs, how was he going to do it?


It was perfect. It is still the best version of cacio e pepe (and with bucatini, mind you) I have had to date. I'm serious!


And so, not only did cacio e pepe become even more pivotal to me, but bucatini, in particular did as well. Unfortunately, I have only stumbled upon it a few times here in LA since I began this obsession. And I look. Once I saw it at the Silverlake Farmers' Market, but it seemed a little pricey. Anyway, on a recent trip to San Francisco, Fred and I poked into our favorite EYEtalian deli and grabbed every kind of bucatini they had. That would be five (5) different brands of bucatini.


And a couple of nights ago I made a dish with the prettiest and fanciest of our bucatinis. It was a type of a cacio e pepe, but I added shaved asparagus stalks, a single clove of garlic, some red pepper flakes, lemon and I topped everything with fresh breadcrumbs. I also used two cheeses; a Grana Padano, for its velvety texture, and Pecorino, for its sharpness. Other than adding the extras, the concept and the technique were no different than the original cacio e pepe.


I'd like to tell you how romantic it was that we made this, our very special dish together. I'd like it to seem like we savored that last strand of bucatini like the Lady and the Tramp. But we were really just so excited and so hungry, that we pretty much inhaled our big bowls of pasta and glasses of chianti. Just-a like-a Mama would-a like-a. 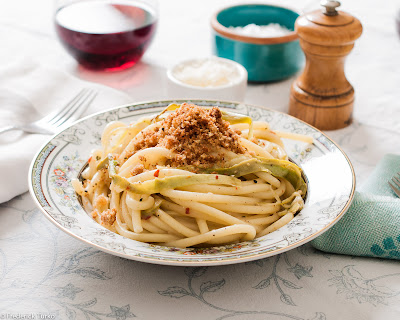 
Directions:
Preheat oven to 400 degrees.Â  Pulse bread in food processor to make bread crumbs.Â  Spread the crumbs on a small baking tray.Â  Drizzle with olive oil and a pinch of salt; toss.Â  Toast for 15 minutes, or until golden brown.
Meanwhile, bring a large pot of salted water to a boil.Â  Cook bucatini until al dente.Â  Reserve a bit of the cooking water.
Just before the pasta finishes cooking, heat about a tablespoon of olive oil in a skillet.Â  Add garlic and a pinch or two of red pepper flakes and cook until fragrant, about a minute.Â  Add asparagus and a pinch of salt; cook until the asparagus until slightly softened.Â  Add juice of the lemon.Â  Toss.
Add the cooked bucatini and parmesan to the skillet with the asparagus; toss to coat.Â  Add reserved cooking water a tablespoon at a time, if necessary, to achieve your desired consistency.Â  Serve, topped with toasted breadcrumbs.