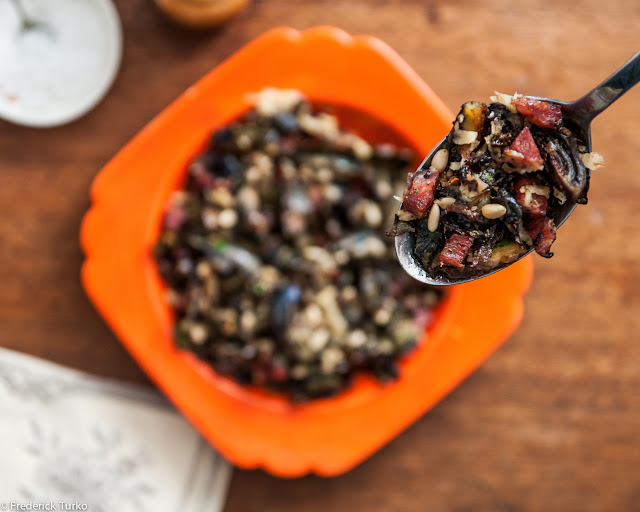 Things have completely settled down from the holiday-ness of the holidays and with the work rush that also comes with the holidays. Mom has arrived safe and sound back in Richmond, and is getting herself all settled there. Iâ€™ve been waiting for this. At least Iâ€™ve said that I have been waiting for this. But itâ€™s so quiet. Itâ€™s so calm. Itâ€™s so rarely so, that I always forget that Iâ€™m not all that great with calm and quiet. Iâ€™m not a very still person. Frenetic might be a better word to describe me. I generally like to keep moving and doing. I always have lists and projects. Iâ€™m lost without them.

Now, I do realize that this is not exactly a good thing. I also realize it drives Fred crazy.
Iâ€™ve never claimed to be a walk in the park.

So imagine my delight when I received a project in the mail last week - my pals up at Columbus Salame sent me a sample of their Finocchiona, which had just won big at the 2013 Good Food Awards for best charcuterie! What to do, what to do...

At first I thought maybe a mac â€˜n cheese carbonara of sorts, substituting the salumi for the bacon. But Iâ€™m (lamentably) really, really trying not to eat that kind of food right this minute. Sad, but true. Then, after a couple more days of research, I discovered an Italian bread called Casatiello, which is stuffed with salami, provolone, olives and what not. Fred and I tried twice and failed miserably. Miserably. I emailed the recipe to Mom to see if she could impart some sage advice, some help, from across the country. She basically told me this was clearly a varsity level baking recipe and to consider something else.

This brings us to last night. I was planning on cooking a brick chicken and using up as much produce as possible from last Sundayâ€™s farmersâ€™ market haul. When I unearthed the tiny, purple Brussels sprouts that I had almost forgotten about, I knew something was stirring. And then Fred figured it all out.

So because of this one, little package that fortuitously arrived in the mail, I suddenly had an entire week of a mission, a project, and with it I had fun, research, frustration, failure and finally, success. And all in the kitchen. Just like I like it.

The meal that we had last night was a brick chicken with a chervil-parsley pan sauce, smashed & crisped baby potato medley with garlic & rosemary and roasted purple Brussels sprouts with salami and pine nuts. And it was all very, very good. 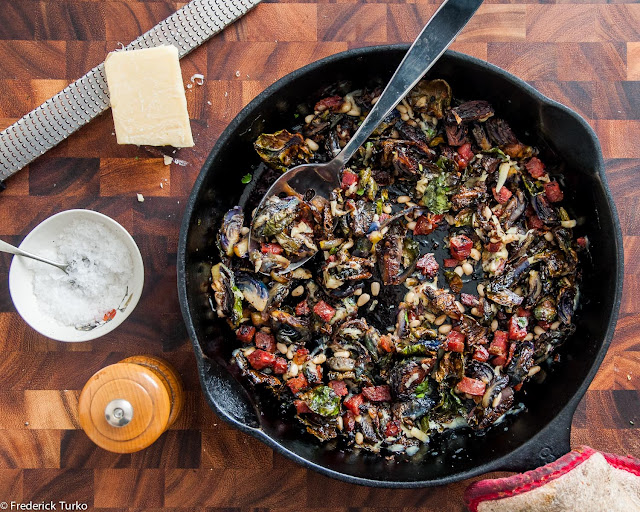 
serves 2 as a side dish

Combine the Brussels sprouts, salami, bacon drippings (or butter), salt and pepper in a bowl and mix well.

Place in oven and cook for 30-40 minutes, stirring every 10 minutes, until Â Brussels sprouts are slightly browned and cooked through.

Garnish with Parmesan and pine nuts.


One year ago: Chicken with 40 Cloves of Garlic
Two years ago: Mercantile
Three years ago: Swiss Fondue with Truffle Essence
Five years ago: The Hungry Cay - Santa Barbara