When my husband and I were newlyweds, we lived up on the North end of Seattle, near a neighborhood called Ballard, which is one of our favorite places to eat, explore, and ride bikes to this day. Thereâ€™s a fantastic farmerâ€™s market, rain or shine, every Sunday. It was there that we first discovered JonBoy Caramels, probably the best caramels Iâ€™ve ever purchased. They are artisan, small batch, use brown rice syrup instead of the traditional corn syrup, and often utilize interesting salt and alcohol combinations, like Absinthe & black salt, or whiskey & smoked salt. Inspired by them, I set out to create my own boozy, salty, artisan version.

I love the idea of the smoked salt, but as I brainstormed, I asked Mr. Romansky, â€œWhat if I used a really good islay scotch for the smokey flavor, then used vanilla salt instead? "Okaaaaaaaaaaaay" and a grin was the reply.

My hubby loves whiskey and scotch, but particularly anything from the Scottish island of Islay, because he really loves that smokey, peaty smell and taste that Islay scotch is notorious for. Laphroaig is one of the most well known for this, thus we usually have some on hand, or at least in the rotation. If you arenâ€™t a fan of that smokey flavor, any whiskey or bourbon would also work here, as would any salt, I just happen to really favor my vanilla bean infused salt. The caramels are not overly â€œboozyâ€ or salty tasting, they are just right.

I played around with these numerous times to make sure I could give you the best detailed instructions possible. Hereâ€™s the thing with caramelsâ€¦ they are actually quite simple to make, as in, not as many steps, time, or ingredients are involved as you may think. BUT there is one finicky requirement and thatâ€™s a good candy thermometer. You unfortunately cannot make caramels without a candy thermometer. (Link to the one I used from amazon below).

Basically, if you cook the caramels for too little time or they donâ€™t reach a high enough temperature, you get caramel sauce. (The best caramel sauce youâ€™ve ever had, in fact). Not a bad thing and this could be a good option if you donâ€™t want to invest in a thermometer at this time. If you cook them too long and the temp gets too high, what you end up with is more of a hard candy/ brittle sheet of caramel that you can smash into pieces and taste like a grown up version of a Wertherâ€™s Original. Again, not necessarily a bad thing, but not that sought after soft, chewy, individually wrapped bundle of joy that is a sea-salt caramel. So if you have never made them before and want to try, hopefully look at it like a little adventure, where no possible outcome will taste terrible and you will definitely get better at each time you make them.

*If you have/would prefer to use light corn syrup in lieu of brown rice syryp, it would most certainly work, as it is actually more commonly used traditionally in making caramels. I just prefer not to use corn syrup if I donâ€™t have to, and have found brown rice syrup to work successfully almost always in itâ€™s place.

Line an 8-inch square pan with parchment, draping it over two of the four sides, and then spray it lightly with your preferred cooking spray or brush with oil.

First, combine the sugar, water, and brown rice syrup in a small but deep saucepan and bring to a boil on medium/high heat. DONâ€™T stir it. Just swirl the pan from time to time to mix.

While your sugar is turning to caramel (aka burning), heat the butter, cream and 1 tsp salt on medium heat in another small saucepan until just simmering. Turn off the heat, add the vanilla and scotch, and set aside.

Finish your caramel. You will be boiling it to a warm golden brown. A candy thermometer when inserted will be about 308-10 degrees, but you can eyeball this part too. Turn off the heat temporarily.

Now you will add in the cream mixture so BE CAREFUL please! Slowly add it in, in a small, steady stream and stirring constantly, pausing when need be as it will bubble up pretty violently. Turn the heat back on and cook*, for about 12 minutes, or until the caramel reaches 247 degrees Fahrenheit (firm ball) on a candy thermometer. Watch this part closelyâ€”it is not something you can just eyeball by color unfortunatelyâ€”and donâ€™t let it go above 248, or the caramels will be too hard to cut and chew. Immediately after it reaches 247/48, remove from heat and pour carefully into the prepared pan, tap the pan a few times against the counter to release any air bubbles, and refrigerate for an hour or so, or until firm.

When the caramels are cold, lift the sheet of parchment from the pan and transfer to a cutting board. Sprinkle with additional flaky fleur de sel, or vanilla salt, and cut into squares. (Sometimes spraying the knife with cooking spray or brushing with oil helps to keep the caramels from sticking). I kept it simple and just cut them into small squares and wrapped them in squares of wax paper, twisting the ends. Parchment would also work fine. You could get creative with how you fold or twist them, I have seen such a variety of ways! Iâ€™ve found they keep fine at room temp and donâ€™t stick around long.

*If you are making caramel sauce instead of caramels, you really only need to cook it for 4-5 minutes once youâ€™ve added in the cream mixture, until it is thick enough to coat the back of a wooden spoon. Pour into a mason jar and cool until ready to serve.

Have fun with this!

I used Ina Gartenâ€™s recipe here as a template for my caramels, with a few tweaks and changes.

Read the original on: More Icing Than Cake 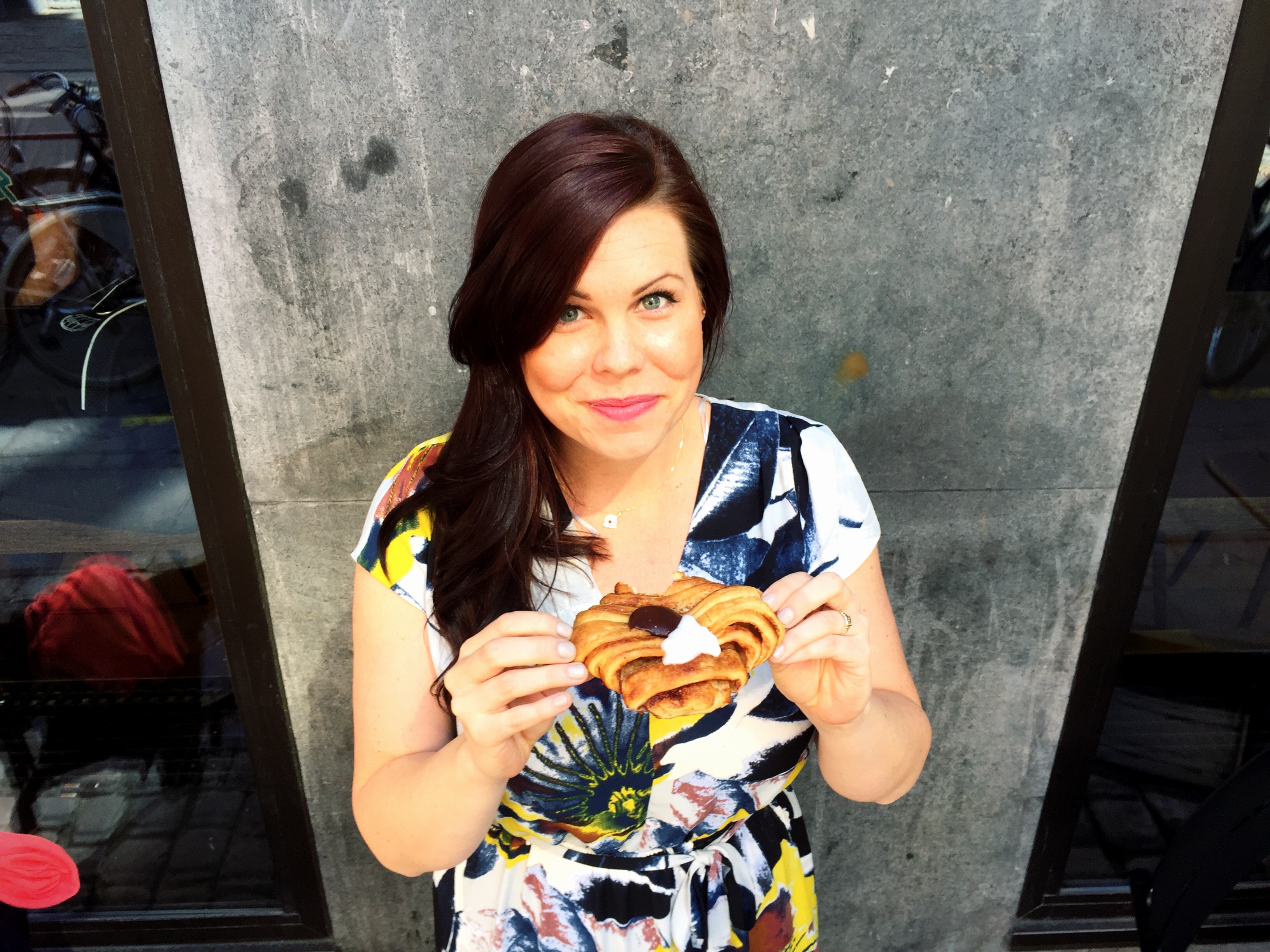 I love to cook. I love to Eat. More Icing Than Cake is more of my motto in life. Food should be exciting, beautiful and delicious.