Lighting Up My Life. 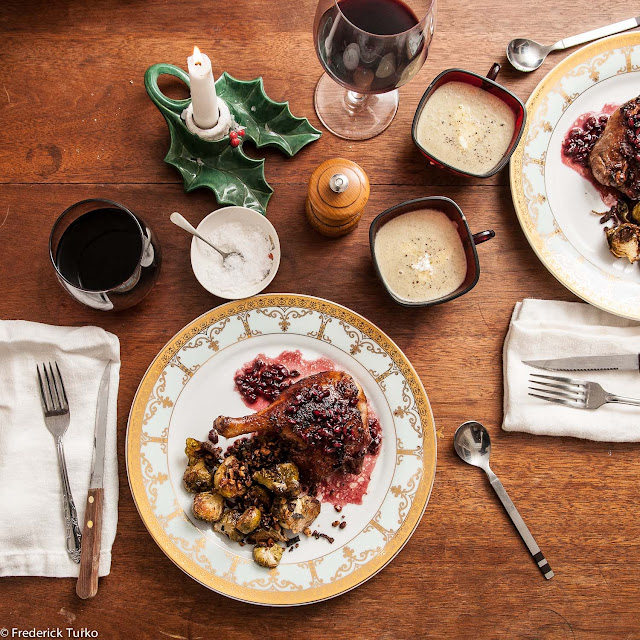 I very recently went on a mini vacation to New Orleans. Fred and I were celebrating our one year anniversary. We had a really wonderful time - ate A LOT of food. I had fully intended to write and tell you all about it. I even started on the returning flight.

But then I returned home to some staggering and devastating news about someone very significant to me: Breeda had finally succumbed to a long battle with Cancer. And then Newtown happened. And then my trip really didn't seem relevant, interesting or important anymore.


And so I thought. I thought and I felt. And I cried. Mostly by myself, in my studio.


And here's the thing: I have decided that my trip to New Orleans is actually very relevant right now. New Orleans embodies and exudes a spirit that I have rarely seen anywhere else. Interestingly, here's the only paragraph I had written about my trip on the day I was returning home. Before everything.


As I fly away, over The Big Easy, to return to the City of Angels, I am choked up. I am. Although always, when I visit other cities I very seriously consider whether or not I want to live there, and this visit to New Orleans was no different. I don't think this is where I will necessarily land but there is a love, a friendliness, a kinship and a spirit that I am extremely sad to be flying away from. And I rarely feel this sense of freedom and community, this spirit, in my town. Not as a city.Â


In the cab on the way to the airport, on my last morning in New Orleans, I had an extremely chatty driver. I had nary a sip of my coffee and was not exactly in the mood for the banter at first. But then I started to really listen to what he was saying. First he told me about the ubiquitous Cajun-French phrase all Louisianans are familiar with that is literally translated as 'Let the good times roll": "Laissez les bons temps rouler". He talked about the strength and power of the spirit, the joie de vivre, that exists in New Orleans. He told me about his wife and their kids. He told me he has been married for forty years and is still madly in love with his wife. He told me that the very night before, the two of them sat on their front porch and shared a bottle of wine. He told me they uttered only a few words to one another as the sun set, sipping their wine. And he told me that, "although it wasn't anything fancy, mind you, that was one very special bottle of wine". He and his wife were both career school teachers,Â had retired but lost their pensions during this economic downturn. So, with the kids long grown up and moved away, to make ends meet, his wife picked up a real estate gig, and he started driving a cab. And he was so damned happy.


And while clutching my too-hot-to-drink coffee, under my hat and sunglasses, I cried a little. That same guy that wouldn't stop talking and caused my eyes to roll out of my head in exasperation, now seemed a sage. I never wanted that ride to end.Â


I forgot about him until I started doing all of my feeling and thinking and crying about other things. I am so glad I remembered, though. Because yes, there is loss and tragedy and darkness. But there is also so much love, and comedy and light. So, so, so much love.


This is for my Breeda, my third parent, and one of the brightest lights to ever shine: thank you so much for everything you have given me throughout my life - from the 8X10 portraits, to Fictionary and The Infamous Rum Cake, to The Runes, to all of my wonderful boxes, to countless hours of giggles, for your beautiful, lasting friendship with my mother, and for your song. I'm not sure if I ever told you, but you light up my life, too. Laissez les bons temps roulerâ€¦

While I was making dinner last night, I became fixated on a pile of pomegranates that have been hanging around since Thanksgiving. I'm not a huge fan of pomegranates, but I didn't want them to go to waste. And then it hit me; pomegranates are supposed to have Cancer fighting properties and are a key element in the Greek myth about how we got our four seasons. Hades and Zeus make a deal; Fall and Winter for Spring and Summer. The pomegranate seemed life-giving and death-dealing. And to top it all off, we can look to the stars, in the story of Orion. Hera, the supreme goddess of women, wears neither a wreath nor a tiara, but clearly the calyx of the pomegranate that has become her serrated crown. What then could be a more perfect item to top our main course, seared duck legs. Though she'd probably pour it over chocolate rather than duck, Breeda would dig it.


This reduction was lovely poured over seared duck legs, but would be beautiful with turkey or pork as well. It would just as nicely work drizzled over an olive oil cake or some creamy vanilla iceÂ cream. Go figure! 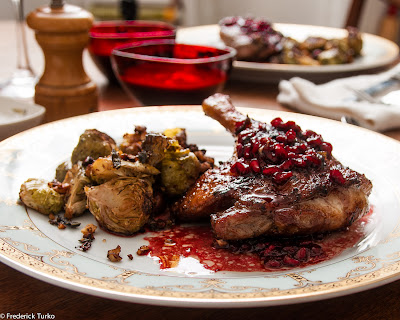 Melt the butter in a large saucepan over medium heat, and sweat the onion until tender, about 3 minutes. Add the peppercorns and cook another 3 minutes.
Add the sherryand cook, stirring, until most of it has evaporated. Add the stock, pomegranate juice, syrup, raise the heat to medium-high, and reduce slowly to a sauce consistency. The sauce will turn brownish red. Season, to taste, with salt and pepper. Remove from heat and add pomegranate seeds.