Swimming Into the Spotlight. 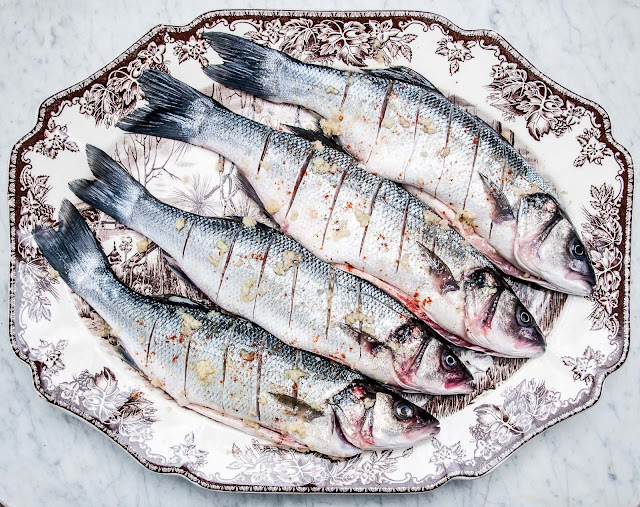 Yellow Umbrella, or Yellah Umbrellah as many Richmonders call it, has been serving up choice seafood in Richmond's West End since my whole life (they opened in 1975). I only learned about the place a few years ago but it quickly became my The Go-To for extraordinary â€“ and sustainably harvested - fresh fish (when I was in town, of course). I also always had to grab some of their remarkable prepared cheese grits right before checking out. Random, right? Not in the South.

This past February they moved. Across the street. You can throw a rock, it's so close. But now they are way bigger and even better. I imagine much to Belmont Butchery's chagrin, they now boast a nose-to-tail, butcher shop with humanely-raised meat. Even better, they offer 'cellar-to-table' wines and cheeses, seasonal produce, artisanal breads and homemade prepared foods.
On their website they claim to have 'fanatical and quality service', and I'm here to tell you it is absolutely true. A week or so ago, whilst my dad, Fred and I began planning a dinner party for six people, their intrepid Travis endured twenty-four hours and a myriad of phone calls from yours truly. During one return call I mistook Travis for my friend, Spencer, and squealed familiarly; during another, Travis thought I called him 'honey' â€“ I'm pretty sure I didn't, but one never knows. I for sure knew I wanted whole fish. They expected whole Rockfish, Red Snapper and Branzino delivered the next day and did not know the exact specs of the fish. Why?
Because someone had to go catch the fish.
So, my new BFF, Travis, called me first thing the next morning with the option of fifteen pounds and over thirty inches of Rockfish. That was definitely the option I desired most but I was quickly reminded that cooking something of that size would be impossible. There was no way it would fit in the oven or the grill. Parade rained on, I settled for four large Branzino and about six pounds of mussels. And a huge chunk of those cheese grits. They scaled and gutted the fish right there in front of us in the store, and even asked if we wanted heads and tails on â€“ which we did. 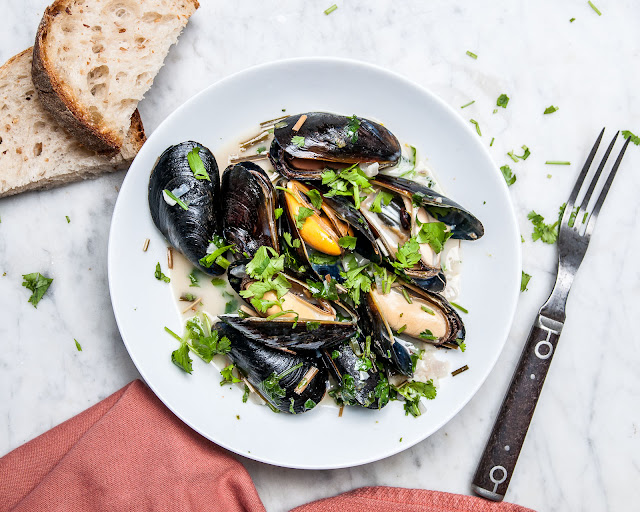 We cooked everything that night. Dad was on fish duty, Fred took the Mussel patrol, and I was assigned 'the sides' (I made a delicate salad of frisÃ©e, lightly dressed with finishing oil, lemon and salt, and roasted sunchokes with a buttery bagna cauda). The mussels were so plump, briny and rich â€“ and the Branzino â€“ which we roasted whole, was bracingly fresh, simple and exquisite. 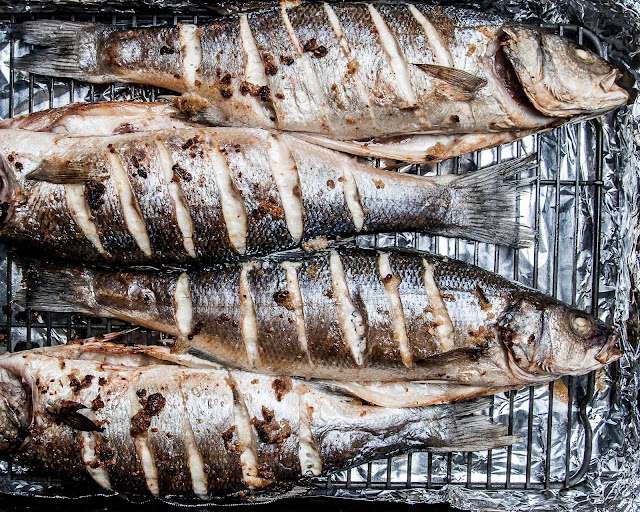 Back in LA and doing some grocery shopping yesterday, I poked around the fish counter to check out my options. They had whole Branzino, but even to say that it paled in comparison would be weak. Paz had a memorable Yellah Umbrellah story to share: she bought a whole Red Snapper from them once and named her fish Carl. I recall her sending me a picture of Carl. This was probably about four years ago and she still waxes on about Carl, the most beautiful, freshest fish she had ever seen and eaten. Ask her about him, I'm serious.
The crew at Yellow Umbrella Provisions are doing something singular and noteworthy. I honestly think their product is unparalleled and the people behind it are equally so. I just don't understand why they are still in the best-kept-secret category.
When I return, I'm going to go back and give Travis a hug. 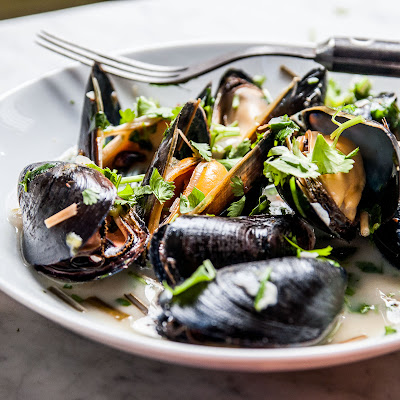 2 tablespoons coconut or safflower oil
1 shallot, finely chopped
3 garlic cloves, finely chopped
1 stalk lemon grass, trimmed (outer layers removed) and finely chopped
1 serrano chile, seeded and finely chopped
1 cup unsweetened coconut milk
2 pounds fresh mussels, rinsed well & de-bearded
Zest of 1/2 lemon
1 teaspoon lemon juice, or to taste
1/2 teaspoon fish sauce, or to taste
1/2 cup whole cilantro leaves
Heat the oil in the bottom of a large pot until hot. Add the shallot, garlic, lemon grass and chile. Cook over medium heat until soft, about 3 minutes. Add the coconut milk and mussels. Cover with a tight-fitting lid and cook until the mussels have opened, 5 to 7 minutes (discard any mussels that remained closed). Remove from heat, and use a slotted spoon to transfer the mussels to a large bowl, leaving the liquid in the pot. Stir the lemon zest and juice, fish sauce and cilantro into the pot. Taste and add more fish sauce and/or lemon juice if needed (fish sauce provides the salt).
Scoop the mussels into a large serving bowl. Pour the remaining sauce on top. Finish with a generous sprinkling of fresh cilantro. Add lemon or lime wedges on the side.
Serve with crusty French loaf to help soak up the juices.
A good, crisp white wine pairs nicely with this dish.Â
Printable recipe.
One year ago: Pasture
Two years ago: Classic Tuna Salad
Three years ago: Paz's World Famous Rice & Beans